Named after their Nanking blue livery, the trains were conceived under the 1955 Modernisation Plan to create luxury diesel express trains aimed at competing with the motor car and the emerging domestic air travel market. Although not entirely successful – they were seen as underpowered, unreliable, and ultimately not economically viable – they demonstrated the possibility of fixed-formation multiple-unit inter-city train services, and inspired the development of the Inter City 125, which resembles them in having an integral power car at each end of the train.

There were two versions, built by Metro Cammell in Birmingham: two first-class six-car sets for the London Midland Region (LMR), and three two-class eight-car sets for the Western Region (WR). They were initially operated by the luxury train operator the Pullman Car Company, which the British Transport Commission (BTC) had recently acquired. Shortly after their introduction, in 1962, Pullman was nationalised, and operation was incorporated into the British Railways network. Originally given the last Pullman vehicle numbers, towards the end of their operational life the trains gained the British Rail TOPS classification of Class 251 (motor cars) and Class 261 (kitchen and parlour cars), although they never carried these numbers. 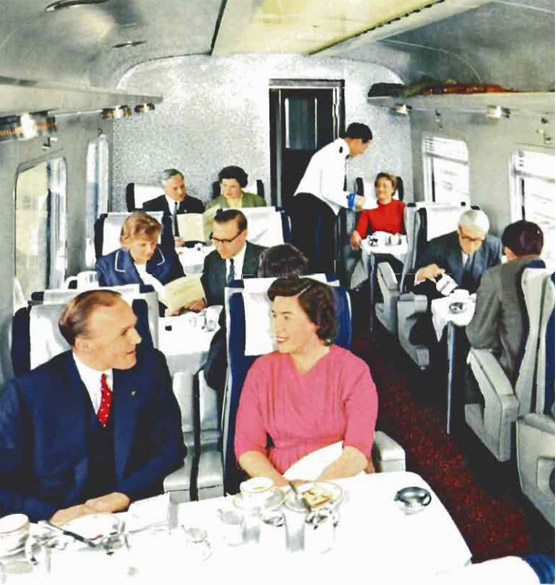 The sets had a maximum speed of 90 mph (140 km/h). The fixed couplings reduced much of the jerky movement experienced by conventionally buffered carriages and allowed smooth acceleration and stable running. The bogies had hydraulically damped helical springs, and the axles were pneumatically braked in a two-stage system, allowing highly controlled stopping.

They were air-conditioned with automatic humidity control. Motor cars had a large primary diesel engine and generator for motive power, and a secondary diesel engine and auxiliary generator provided power for the air-conditioning, fridges and ancillary equipment. A single auxiliary per set was normally sufficient. An onboard technician monitored the supply of services.

Seating was 2+1 armchair-type round tables with a table lamp and with steward call button. The saloons were protected from track noise by extra insulation in the bodywork and double-glazed windows with Venetian blinds between the panes.